When I was 18 I dated a quiet, partly-nerdy, ever thoughtful, really bright guy. He read a lot.

He had a shock of red hair.

Later I found out he had red pubic hair, too, natch, when he visited our family home from out-of-state. My brother followed his shower in the white shower/tub combo and immediately reported, as only a 15-year-old little brother can, “His pubes are orange!”

It was a moment. But I digress.

Anyway, there was a time when within the context of a conversation long forgotten, the red-headed wonder uttered the words, “Situation ethics are like no ethics at all,’ with stony faced seriousness.

An 18-year-old boy-man said those words. Who says that? At that age? At any age.

In the rearview mirror it seems as impossibly outlandish now as it did at the time. Only for different reasons. 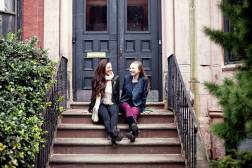 Because I was not nearly mature enough to hear that kind of wisdom and probably never had pondered the word ‘ethics’, I immediately reported his statement to my best friend with the closest impersonation of his oh-so-serious voice I could muster. We laughed uproariously restating the phrase often especially before embarking on any kind of shenanigan.

Close to 40 years later I reconnected with my barely-red and mostly-gray high school love. (Facebook, you’re a wonder. But I digress. Again.) I asked if he remembered.

Of course he didn’t, those days long left behind and buried under adult responsibilities. He said, “It sounds pompous enough to have been me.”

He was 18. Pompous? Quite remarkable.

Now I measure nearly every important decision I make, political stand I take, essay I write, lesson I teach my grandson and will teach his infant brother, vote I cast, and weary self-evaluation at the end of a day, by those words.

And I think a country fractured by identity politics and hypocrisy mourns Senator John McCain precisely because he practiced ethical congruency with a rigour most don’t know exists let alone understand.

In the rearview mirror, ‘situation ethics is like no ethics at all’ comes into keen focus.

Filed under “Words to Live By.”

Thanks, Andy. (I made you a red-headed hair model, okay? Sorry, I digress.)

Follow Checking the Rearview Mirror on WordPress.com
Join 119 other subscribers