I don’t think of myself as someone who has anything in common with the Bush family. Not 41 and not 43.

My politics tend to be left of center and I didn’t vote for either of them. Their patrician upbringing couldn’t differ much more from mine. I have grandparents who were Italian immigrants and one who was raised in a Jewish orphanage. There were no second homes or sail boats.

The ever-present smirk on W’s face always bothered the heck out of me, though now I don’t think it’s so much a smirk as just his face. (Kinda like RBF* but different.) George Herbert Walker Bush seemed to me, at the time of his race against Bill Clinton for a second term as president, out of touch with the common man. Not mean spirited but lacking a generous spirit and desire to understand the day-to-day struggles of the working class.

Elite prep schools, ivy league colleges and law schools didn’t speak to me and didn’t represent anything in my family’s world. Not to mention the land and oil baron part of their stories, more like a fairy tale to me.

I pretty much wrote them off and out of consciousness.

Over the last ten years the Bush family has come back to mind. Of course there has been the annual news report of elder Bush jumping from an airplane on his birthday, but I’ve begun to appreciate W when he shows up on the late night talk show circuit bantering with Jimmy Kimmel. I’ve read with interest articles about his paintings and the charities he supports with them.

I haven’t suffered Clinton-like Bush-fatigue, or been tortured with family fashion, style, and vacations the way we have been with post-Obama administration non-news. Stories about W generally have more substance and are far less frequent. I enjoy them.

All this I noted checking the rearview mirror as I witnessed the sad week leading up to President George H. W. Bush’s recent burial at his presidential library in College Station, TX.

Thirty years after he occupied the Oval Office. 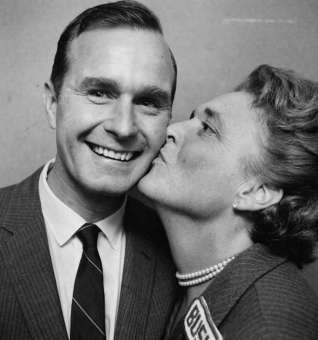 Through the lens of the loss of my parents I absorbed the deaths of Barbara and George H.W. within a half year of each other. Watching and listening to W speak about his father brought my own dad to memory along with my tremendous sorrow at having lost him. I could empathize deeply with the Bush children and grandchildren as they said difficult good-byes to their matriarch and patriarch within such a short period. It was the same for my brothers and me.

I watched the president’s flag draped casket carried by military service personnel. Dad didn’t want his similarly covered. He reckoned he hadn’t done enough during WWII to warrant that respect. In his mind he was one sailor doing the least he could to help in a war effort drawing to a close by the time he reached the age of service. He was embarrassed he hadn’t done more though it wasn’t he but the calendar that bore the fault. He was turned away when he tried to enlist. Too young. He hesitated to call himself a veteran. He was a radar man. He spent much of his time in uniform helping to clean up the Marshall Islands post WWII. In his eyes, hardly a vet. When other dads told their stories, he would allow his to go unspoken.

George H. W. Bush was precisely the kind of man Dad believed should have a flag draped coffin, be saluted and acknowledged. A real vet who flew dozens of bombing missions.

I bet the 41st president believed Dad was just the sort of guy who should have been honored. An every man who did his duty without fanfare then quietly returned home to work and care for family, never to mention it again.

We ignored my dad’s wishes. His funeral mass was said with his casket present, a flag covering it.

In the rearview mirror the grand Bush family I once thought so little resembled mine now seems kin. Both parents gone in less than a year after a long and loving marriage. In a society where women are expected to live longer than men, my dad and W’s outlived their wives to keep their decades old promises to care for them for life, then faded away. As I heard the president wanted etched on his grave marker the words, “He loved Barbara very much,” I remembered my dad saying upon his fatal diagnosis, “My only sadness after this good life is that I will break my promise to your mother to love her til the end of her days.”

Against all odds, he kept that promise.

During the days after 41’s death, stories tumbled from the lips of friends and family,

some funny and others so touching they barely rose from the tellers’ throats without first causing them to choke on a sob.

Two men who were family first, followed by loyalty and integrity, and country.

But for broccoli love, very much the same. My dad ate his veggies.

Just like the Bush family saying good-bye then marching into Christmas with sadness and celebration, so did our little family. A cremation and Christmas a week later.

What I’ve come to believe in my later years to be nearly always true, was proven to me again – our similarities are greater than our differences. In the heat of debate as we arm-wrestle ideas, it’s hard for me to remember. When watching television and listening to pundits translate our heads of state, their vision and values, I rely on third parties to tell a story which may or may not be complete and accurate as they encourage me to line up ‘fir or agin’ our leaders.

That we are flesh and blood, trying our damnedest to live lives of honesty and contribution while caring for families and communities, is where I find commonalities that need no interpretation.

We are all one I see clearly in the rearview mirror. Not only in retrospect do I want to remember this but in moments when I stand in opposition, lost in my judgment of another rather than my compassion and curiosity for who they really are. That’s when I want to remember we are one.

And that’s how I’ll remember George Herbert Walker Bush and my dad. Seemingly different and at the heart of things, so very alike. As his grieving son and me.

Follow Checking the Rearview Mirror on WordPress.com
Join 119 other subscribers