Peanut butter sandwiches with Olallieberry jam and a little mac salad on the side. Daily lunch when staying with my grandparents during the hot summers in Santa Rosa.

My grandmother, Vivian, made her jam and pies during the first weeks of June, the only time Olallieberries are available.

Grown almost exclusively in the moderate climate of the northern and central California coast, they came from Corvallis, Oregon. Kissed by morning fog and cooled by the nearby Pacific Ocean, they flourish in California. But when warm weather comes, the berries are done. There’s less than a three week window in which to grab them. Then a long year before another chance arrives.

My dad used to say God must harvest them himself, so beautiful and delicious are they. 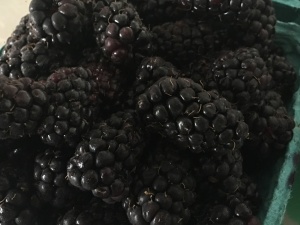 Years later when I lived on the coast in Montara with a child of my own, blackberries and raspberries grew wild in the empty lot behind our house. Long pants on to escape their stickery brambles, Mom and I would pick until our colanders were sufficiently full to fashion a pie. But they weren’t Olallieberries, that special cross of a Youngberry and Logan blackberry.

God’s hand for sure, Dad.

My grandmother was raised in an orphanage and I’ve wondered who taught her to cook and bake, and she was good at both. Questions we think of too late, when there’s no one to ask.

She left few recipes, mostly those that belonged to others. No recipe for her Olallieberry pie or jam, or macaroni salad, leaving me free to remember and create on my own.

Just like her. A free spirit and free-thinker in a generation unfamiliar with and unwelcoming to either quality in women, as if it weren’t difficult enough to be Jewish and raised in an orphanage. Or, maybe because of.

I’m sure her flaky crust came by way of lard or Crisco because that was the way of the day. When I first set out to re-create an Olallieberry pie I started with my mother’s recipe for pie dough. I didn’t succeed even with Mom by my side. There was something about that particular dough which wouldn’t come together for me, or even for her if I were around. The dough and I were not friends.

Then came the Silver Palate Cookbook and the one pastry dough recipe that loves me. A good start to my Olallieberry memory.

I combed recipes from here and there; I searched the internet and old cookbooks going back to Fannie Farmer’s Boston

Cooking School. Then I found a recipe in a McCall’s cookbook I’d been given in 1975 by my cousin, Eva. “Fresh Berry Pie”.

Can you taste things with your imagination? Read an ingredient list and with each addition have the mouth in your mind follow along, adding flavors until a taste takes shape? 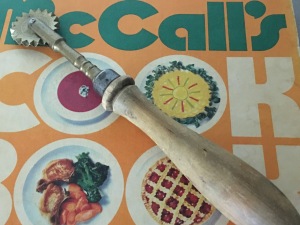 I knew. I could taste it. Dimension, another layer of flavor, depth without sweetness. Unexpected. In a berry pie, or in the cookbook falling apart high up on the shelf in my kitchen cabinet.

I used Silver Palate dough for my crust, four pints of beautiful Olallieberries snagged during their way-too-compact-early-June season, and from deep in my cluttered baking drawer, Vivian’s  pastry cutter to pink the lattice ribbons for the top.

Did its baking fill the house with a scrumptious fragrance? Did it look to tempt the devil himself? Was it torture waiting for it to 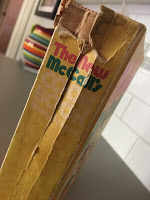 cool? Did I remember to slide a little a la mode next to it on the plate? Did I savor every bite?

You don’t really need me to answer, do you? 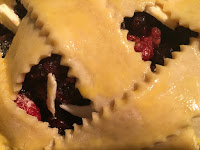 Right out of a 1950’s diner. Lava-like juices had bubbled through the lattice and cooled around the rim to a shiny, luscious deep purple. Flaky barely sweet pie crust, each bite filled with Olallieberry goodness.

As tasty as it was, delicious as the day was long, it was this memory that filled and warmed me, reminded me of who I am, the people and stories that came before me. The joy wasn’t as much in consuming pie as it had been in pursuit and capture of summers five decades ago. Summers filled with sunshine, and love, and berries “harvested by God’s hand”, then baked by my grandmother into an Olallieberry memory.

Follow Checking the Rearview Mirror on WordPress.com
Join 119 other followers